In the spectacular action-adventure “Gods of Egypt,” the survival of mankind hangs in the balance as an unexpected mortal hero Bek (Brenton Thwaites) undertakes a thrilling journey to save the world and rescue his true love. In order to succeed, he must enlist the help of the powerful god Horus (Nikolaj Coster-Waldau) in an unlikely alliance against Set (Gerard Butler), the merciless god of darkness, who has usurped Egypt’s throne, plunging the once peaceful and prosperous empire into chaos and conflict. As their breathtaking battle against Set and his henchmen takes them into the afterlife and across the heavens, both god and mortal must pass tests of courage and sacrifice if they hope to prevail in the final battle. 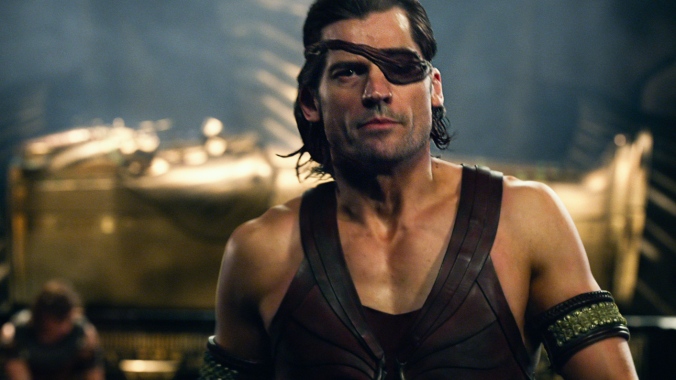 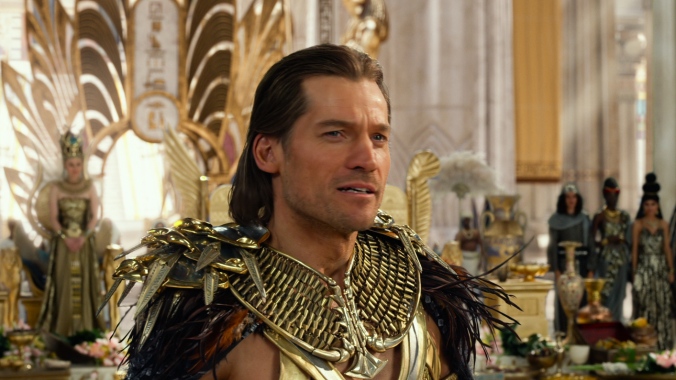 Writers Matt Sazama and Burk Sharpless sought to give audiences a thrilling, elaborate adventure that is part homage, part invention and fully inhabitable as a transporting experience. Using the Osiris myth as a blueprint – Gods of Egypt re-imagines the tale of the sun god Ra, his vengeful son Set and Ra’s dutiful grandson Horus, folding several classical narratives into one adrenaline-pumped film following the journey of a mischievous mortal who joins forces with a fallen god to save all of creation from chaos and tyranny.

Meet the gods of Egypt: Ra (Geoffrey Rush) is the father of Osiris and Set, Ra is the Lord of Light and the Cosmos. It is his duty to pull the sun over mythological Egypt at the end of each day. As he does so, he passes into the chaos of the underworld where he fights the demon Apophis. After he beats Apophis back each night, Ra returns to the living world bringing with him the light of a new day. Ra is the creator of this world and its ultimate guardian. He possesses insight beyond any living god or mortal, and views the gift of life as a lesson and a journey. In his eyes, both Osiris and Set were equal.

Set (Gerard Butler) is son of Ra and god of the Desert, Set is plagued by jealousy. In Set’s eyes, his father apparently favors his brother Osiris, the God of Nature and Life, who is deemed to be a wise ruler and merciful facilitator of human souls into the Afterlife. Set believes that mortals are dispensable and far inferior to the gods. Set puts his pursuit of power, authority and material wealth above all else.

Horus (Nikolaj Coster-Waldau) is the lord of the Air. While his ego is initially inflated by his status as a god, through his association with mortal Bek, Horus slowly learns to respect mortals, and even develops a liking of them. It’s a change of heart he’ll need if he’s going to avenge the death of his father Osiris and retake the throne from the usurper Set. Horus’ deity is a winged and armored form with a falcon-shaped head. His power resides in his eyes.

And the mortal who seeks Horus’ alliance is Bek (Brenton Thwaites), an affably mischievous mortal comes from modest beginnings and has little to offer the woman he loves, Zaya, aside from his heart. Having lost faith in the gods, Bek relies on his own zeal and ingenuity to make his way in life.

Coster-Waldau has has created a strong foothold in Hollywood, and continues to rise, starring on a critically-acclaimed television series and a vast array of film projects. Coster-Waldau will return for the sixth season of HBO’s epic, award-winning series “Game of Thrones,” starring as ‘Jamie Lannister.’ After leaving his handprint on the European Film and Television industry, Coster-Waldau quickly made his transition to American Cinema.   His previous films include “Black Hawk Down,” “Enigma,” “Kingdom of Heaven” and “Firewall.”

Bringing to life a complex array of fictional characters, “Gods of Egypt”  is an original story unlike anything viewers have seen that will open this February 24 in cinemas nationwide from Pioneer Films.

Pelikula Mania “Game of Thrones” Star Nikolaj Coster-Waldau in the Colossal Action-Epic ‘Gods of Egypt’
%d bloggers like this: