Have a short film that deserves the spotlight not just in the Philippines but in Hollywood? Now is your chance to give that well-deserved spotlight for your story and be recognized internationally!

Join the Short + Sweet Film Festival Manila and get your short film the chance to be screened not just locally but internationally. Check out the details below: 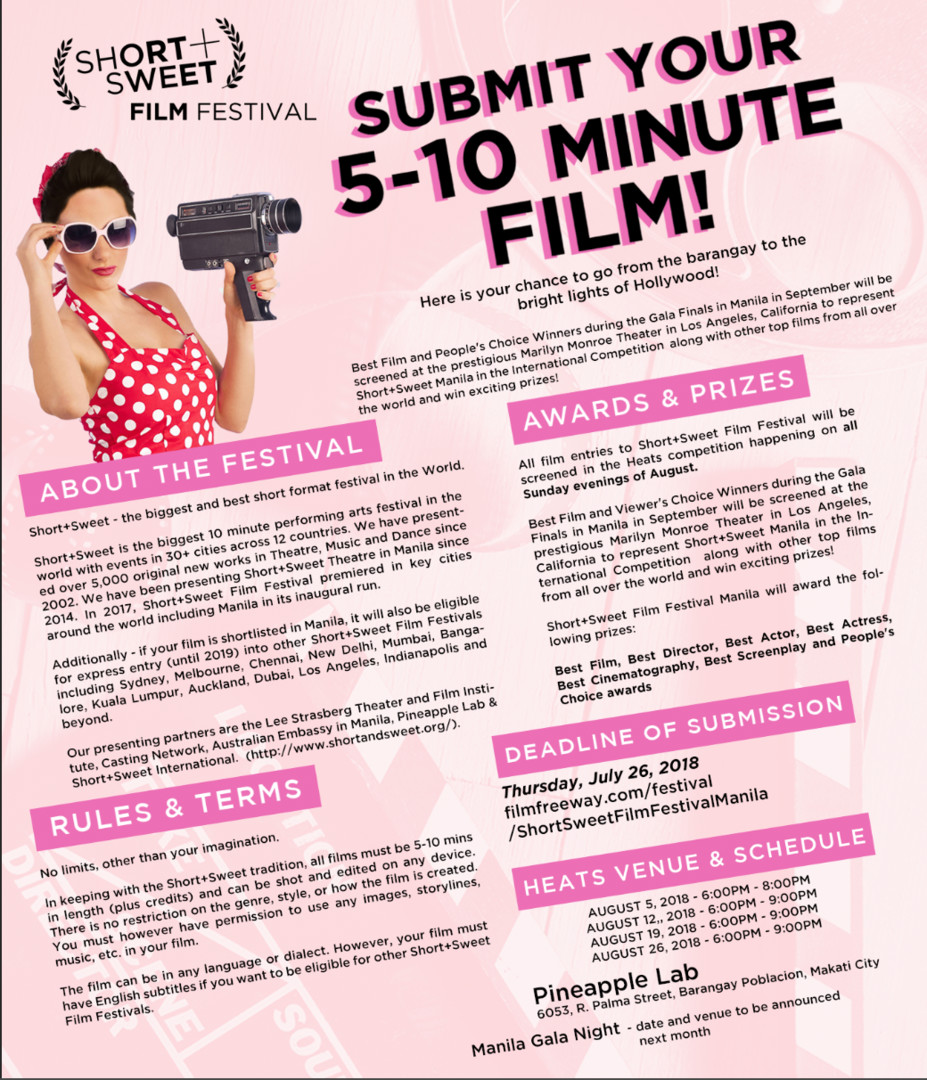 Best Film and People’s Choice Winners during the Gala Finals in Manila in September will be screened at the prestigious Marilyn Monroe Theater in Los Angeles, California to represent Short+Sweet Manila in the International Competition along with other top films from all over the world and win exciting prizes!

Short+Sweet – the biggest and best short format festival in the World.
Short+Sweet is the biggest 10 minute performing arts festival in the world with events in 30+ cities across 12 countries. We have presented over 5,000 original new works in Theatre, Music and Dance since 2002. We have been presenting Short+Sweet Theatre in Manila since 2014. In 2017, Short+Sweet Film Festival premiered in key cities around the world including Manila in its inaugural run.

Additionally – if your film is shortlisted in Manila, it will also be eligible for express entry (until 2019) into other Short+Sweet Film Festivals including Sydney, Melbourne, Chennai, New Delhi, Mumbai, Bangalore, Kuala Lumpur, Auckland, Dubai, Los Angeles, Indianapolis and beyond. Our presenting partners are the Lee Strasberg Theater and Film Institute, Casting Network, Australian Embassy in Manila, Pineapple Lab & Short+Sweet International.

All film entries to Short+Sweet Film Festival will be screened in the Heats competition happening on all Sunday evenings of August.

Best Film and Viewer’s Choice Winners during the Gala Finals in Manila in September will be screened at the prestigious Marilyn Monroe Theater in Los Angeles, California to represent Short+Sweet Manila in the International Competition along with other top films from all over the world and win exciting prizes!

No limits, other than your imagination.
In keeping with the Short+Sweet tradition, all films must be 5-10 mins in length (plus credits) and can be shot and edited on any device. There is no restriction on the genre, style, or how the film is created. You must however have permission to use any images, storylines, music, etc. in your film.

The film can be in any language or dialect. However, your film must have English subtitles if you want to be eligible for other Short+Sweet Film Festivals.

The First (10) Wave Heats have already been selected and may be seen below:

Deadline for submission is extended until August 15, 2018. You can send them at https://filmfreeway.com/ShortSweetFilmFestivalManila

Heats Venue and Schedule is as follows:

The Manila Gala Night date and venue will be announced soon.

Pelikula Mania Get Your Short Film be Screened Internationally, Join the Short + Sweet Film Festival Manila
%d bloggers like this: