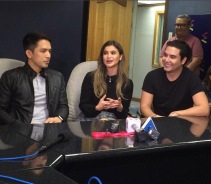 Photo Credits to their owners

These are just guesses, mind you.

No release date has been announced yet but as per their social media posts, they begin production next month which means the film will arrive in more or less three months from now. The film is a co-production of The IdeaFirst Company of Jun Lana and Perci Intalan and VIVA Films.