What do you get when three bumbling “holdaper”-wanna-be’s aspire to get a piece of the biggest heist of their lives?  With “ANG PANGARAP KONG HOLDAP”, it’s an hour and a half of laughing out loud and more!

Set in the imaginary Barangay Husay, right at the heart of Tondo Manila, we convene among best of the worst criminals in the land.  Eman, played by Pepe Herrera, and his two friends:  Toto, played by Jerald Napoles, and Carlo, played byJelson Bay, their group starts out as the underdogs, failing at every opportunity to succeed in any of their small time scams.

Then a newbie is introduced to their group by Eman’s father played by veteran actor Pen Medina.  He decrees Nicoy, played by Paolo Contis, to become part of Eman’s group breaking the tradition of having only 3 members per gang.  Nicoy is met with adverse reactions but was eventually accepted by Eman and his friends breathing new vigor and hope for their dream of succeeding in an ultimate scam.

But the story is more than just this small band of goons, we are taken on a journey of evil plots intertwined by characters separated by less than 6 degrees all boiling into a pot that is probably the biggest, if not the most absurd heist ever to come across this side of Tondo.

Written and Directed by commercial director Marius Talampas, who might be new to filmmaking as this will be his first full-length film, but he sure has done his rounds in the commercial industry.

His career kicked off by a viral video titled “Yung Pula o Yung Puti”, a fun video he made with his best buddy Pepe Herrera whom he has known since their High School days in JASMS.  His style and technical prowess are evident in each crisp shot and sequence, making the milieu of Tondo as savory as that twice-cooked adobo from your favorite carinderia. 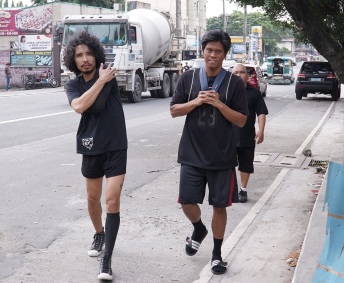 “Ang Pangarap Kong Holdap” is heavily reminiscent of Guy Ritchie’s style of quick wit and dry humor evident in the shots and story’s pacing, a director whom Talampas admits has heavily influenced his style.

If you’re a fan of those kinds of movies then “Ang Pangarap Kong Holdap’” will seem like a manly breath of fresh air for you especially with all the rom-coms competing for moviegoers attention nowadays.

You will not be disappointed with what this one has to offer.

Eman, Carlo, and Toto are the dumbest thieves in Barangay Husay, a town that houses the best hold-uppers, snatchers, and criminals in Manila.  They are an embarrassment to the town, and are always mocked by the other group of criminals because they have never succeeded in any of their hold-up attempts.

Ka Paeng, the leader of the organization of criminals in Barangay Husay and father of Eman, decides to add newcomer Nicoy to his son’s group so they can improve their chances.  The idea didn’t sit well with the group but they didn’t have any choice.

Nicoy, desperate to be accepted by the group, presents an opportunity.  He shares an information about an item that will be bought for a large amount of money in an abandoned warehouse.  Nicoy suggests that if they rob the trade, it will change their lives forever.

The heist, he says, will launch them as the top criminals in Barangay Husay.  Unknown to them, a lof of other dangerous parties are also interested in the trade, including Ka Paeng himself.

Will the heist fulfill Eman, Carlo, and Toto’s dreams to become the top criminals in Barangay Husay?  Or will this be another one of their embarrassing failed robberies?

Catch the riot and have an ROTFL time with friends on starting on November 28 (Wednesday) when “Ang Pangarap Kong Holdap” (from Mavx Productions) is released in theaters nationwide.