When the original Happy Death Day opened at No. 1 to more than $26 million in fall 2017, moviegoers were riveted by the idea of a heroine who had the chance to make the most of the last day of her life—reliving over and again the 24-hour period that led up to her murder. Needing no one’s permission to turn the tables on her tormenter, Tree (Jessica Rothe) would stalk the killer into submission. The film upended the classic tropes of the horror genre, and audiences went wild for the delightfully twisted tale.

Drawing inspiration from such classics as Groundhog Day, director Christopher Landon—whose prior films included Paranormal Activity: The Marked Ones and Scouts Guide to the Zombie Apocalypse—revealed a fascinating knack for importing inspiration from a wide range of films into the horror genre.

And luckily, Landon, who is drawn to tales that both entertain and challenge his audiences, wasn’t ready to let go of Tree’s universe quite yet. “We didn’t intend to make a sequel to Happy Death Day, but I had a thought during postproduction that clicked,” Landon says. “It suddenly made perfect sense as a continuation of Tree’s story. I had this idea that she had unfinished business in her life. A multidimensional world in which everything was the same, yet different, allowed me to explore her personal loss.” 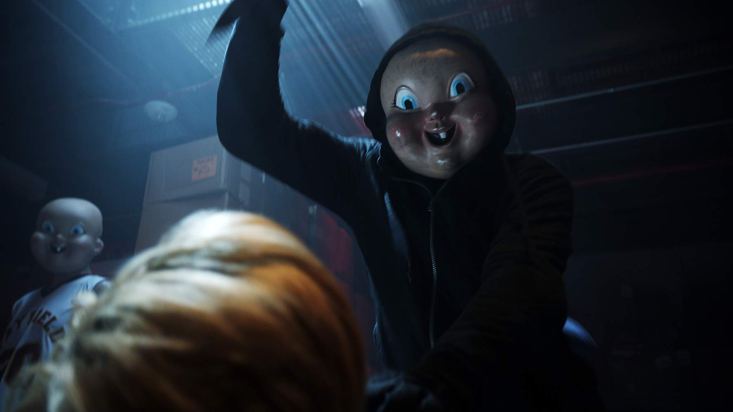 Approached by friends, fans and conspiracy theorists alike after HDD was released, Landon relished how much audiences dug into the narrative and created their own theories about what was happening in the story. “When we made the first film, everyone had a different idea about why the time loop happened,” he says. “It wasn’t until I had this idea that I realized that the clues were buried all along. We built this film from that starting point. Audiences wanted to know what caused the time loop, and this was a fun way to explore it.”

While Tree outsmarted her own death in Happy Death Day, the sequel gave the filmmakers the opportunity to delve deeper into what was happening behind the scenes—and just out of our reach—to explain the loop and reveal more of her tumultuous past. At the beginning of Happy Death Day 2U, we find a protagonist who has made amends, has forgiven herself and is finally happy. Still, according to Landon, once Tree realizes that she’s stuck in another type of hell, she has some big decisions to make.

“Tree is in a very difficult place,” he says, “and has to choose between her past and her future. She can stay in one dimension and be with her mom, but there is a very likely chance that she will lose Carter if she does. This alternate reality she’s living in doesn’t belong to her, as the pain and loss that have happened are essential to her being. She needs to own them and get back. Initially, she doesn’t want to close the loop, but rather, stay put. Once she realizes this isn’t where she belongs, the movie becomes about her getting back to where she does.” He pauses. “She’s a bit like Dorothy in Oz. She has to figure out how to get back home.”

It was crucial to Landon to not fall in the trap that so many filmmakers have when they try to blend genres. For the director, Tree’s journey is one of absolute empowerment. “She thinks there is still a killer after her, and she doesn’t want to be a victim,” Landon says. “Tree refuses to be the final girl and will reset her own day in order to save her friends. That gives a very heroic aspect to her character. In the first movie, she’s the most selfish person. Now, she’s going to go to any length to save her friends and herself.”

About Happy Death Day 2U

When last we left Tree, she saved herself from a certain death at the hands of her roommate Lori (Ruby Modine, Showtime’s Shameless) as she kicked the psychopath out of the Kappa Nu sorority window. Tree’s never-ending birthday was FINALLY over, and she managed to start an entire new life…swearing to never repeat her old mistakes again.

Or so she thought.