“The Hunger Games: Mockingjay – Part 2” brings the global motion picture phenomenon to its thrilling and emotionally powerful last chapter as the stakes for Katniss Everdeen escalate from surviving the most deadly games ever devised to setting the course of the future.

Now, in the final chapter of The Hunger Games, with all the Districts united against the Capitol for the first time, tomorrow itself is on the line. For Katniss to truly be herself, she realizes she must now fully take on the indomitable Mockingjay spirit in a last stand to set things right.

Says director Francis Lawrence: “In this film, Katniss takes the action back into her own hands and goes after Snow personally. The movie really opens up as we go deep into the streets of the Capitol, coming full circle from Katniss’s journey there in the first film. There’s more action, more scope, more emotion and most of all, this film brings the story to its moving conclusion.” 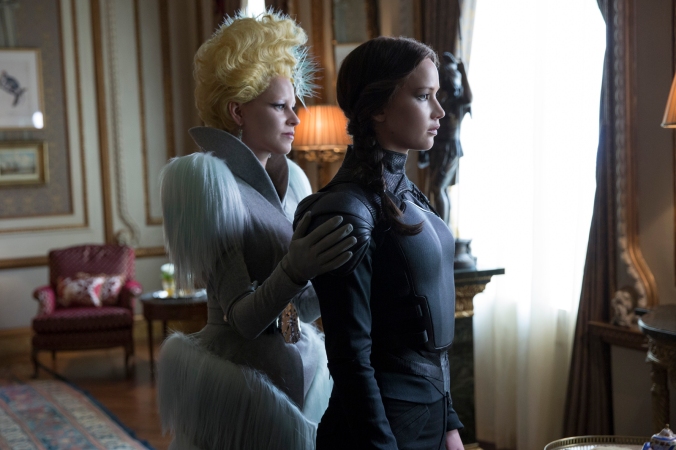 “This is the chapter when Katniss really starts to believe in the impact that she can have,” Lawrence comments. “She’s always been so reluctant and has always found herself in situations where all she can do is try to survive, but now she’s turning the tables. I was excited for her to finally take her place as a leader. At the end of Mockingjay – Part 1, she was kind of numb, and genuinely unsure if she wanted to go on. In Mockingjay – Part 2 she starts seeing the bigger picture. She’s looking beyond her own personal losses and gains to focus on making a better future.”

Now, Katniss’s concerns are being channeled directly into action – taking the character for the first time into all-out combat beyond the controlled confines of an arena. Raising the stakes, Katniss’s little sister Prim, long her motivation to fight against the Capitol, is now a medic in the battle zone.

“The action scenes in Mockingjay – Part 2 are incredible,” Jennifer says. “Some of it was difficult – shooting in wet tunnels, in and out of the water and doing fight choreography with 20 pounds of waterlogged gear – but it was totally worth it because it is going to look fantastically real for audiences.”

It all brings Katniss to the denouement of her world-changing tale. Concluding the series is bittersweet for Jennifer Lawrence, but she is intrigued to leave Katniss at the most promising juncture of her life. “She’s started to see the beauty in humanity in this film,” Jennifer observes. “In the beginning she had a short view of the way things are because of her upbringing. She did not have much hope then, and she felt alone for a lot of her life. During everything that has happened – in the Games, in District 13, in the Capitol at the end of this story – she found herself more and more connected to people.”

Jennifer has tremendous gratitude for being granted the chance to embody Katniss. “I have loved being a part of a film that sparks some really cool conversations,” she concludes. “It’s been an incredible chapter in my life, and the way the films have resonated with people has been amazing.”

One last time, join the revolution this November 18 when “The Hunger Games: Mockingjay – Part 2” invades cinemas nationwide from Pioneer Films.