Greta played by Lauren Cohan is off from an abusive relationship by working as a temporary nanny to a son of an old couple who is about to go on a vacation. As she arrived at the house or mansion as it looks to be, she didn’t know anything about The Boy she’s going to look after. And even though the pay is very good, what happens in the mansion isn’t worth any amount at all.

As she enter the mansion, nobody answered, she took off her shoes, put down her bag and explored the house like someone the Heelshire’s already knows. While it may be trespassing, they did invited her to be the nanny of their son. But the sole purpose of the exploration is to build an eerie atmosphere the film needs along the way for a more effective scares. She meets Malcolm first, the Heelshire’s charming and trusted grocery boy and helper at times. The two already got comfortable discussing about the Heelshire in a flirtatious way. He then introduced Greta to the Mr. and Mrs. Heelshire who are just talking to their son Brahms. Malcolm leaves just before the Heelshire introduced Greta to Brahms, a porcelain doll. Much to her surprise, she thought that it was all just a joke.

The Heelshire taught Greta her job and Brahms’ rules before they go on a vacation. Before the Heelshire leaves, Greta already experience weird things like missing belongings and voice of a child. The film also used dream sequences multiple times for additional scares which surprisingly worked for most. Promising that she’ll take care of Brahms like he’s her own son, the Heelshire leaves and is off to their destination. But Greta isn’t comfortable with Brahms, it creeps her out and thinks Brahms rules are ridiculous.

Weird and scary things starts to happen and some of it are happening within her reach. As the Heelshire left the mansion, Malcolm and Greta bonded more than the usual and decided to leave and take a break from their works. While Greta is taking a shower, something (Brahms, we suppose) took Greta’s dress and necklace. She tries to look for it as soon as she notices but it’s nowhere to be found. She then sees the stairs of the attic lowered even though it was impossible for her to do before. Thinking it was just Malcolm, she climbed up and checks it. But somebody locked her up there and she slips and passed out at something she thought to be a person.

Everything happened at night, and the attic was pitch black to Greta. The usual jump scares are used most of the time in the film and it usually works especially those who likes to scream even though things aren’t that scary. As soon as she woke up, she explained everything to Malcolm but everything looks normal to him. But everything is about to get worse.

Greta notices Brahms to change positions, not the way she left her. Added with voices calling her name, Greta now believes that Brahms’ spirit is living inside the doll. She locked herself in her room and she sees a shadow of someone walking the other side of the door. The voices and the walking sounds stopped as Greta pleaded, she then saw someone put something in front of her door and as she checks it, a peanut butter sandwich is served in a tray just for her. She looks at Brahms and laughed, she thought that Brahms’ doesn’t intend to hurt her, he just wanted her attention.

She then started to take care of Brahms, followed his rules and ignored Malcolm most of the time. But she doesn’t want to feel crazy, she told and demonstrates to Malcolm how Brahms can move from one place to another if someone isn’t looking at him. Malcolm thought it was some sort of magic but it wasn’t. Both agreed to take care of Brahms not knowing on the other side of the world, the Heelshires just commited suicide just after writing a letter to Brahms.

But Brahms is jealous of Malcolm, he wanted Greta all to himself. So weird things happen when Greta and Malcolm starts to get intimate for them to stop. But more surprises came as Greta’s ex-boyfriend arrives at the mansion. Greta, though nervous remained calm before anything can happen. Cole thinks that taking care of a doll is crazy and Greta should come home with him but Greta said that they should eat first. Malcolm arrives at the Heelshires and tension rises as Cole, who looks like someone who starts a fight feels like something is going on between the two.

Greta said they should all take a rest and just wade it out. Malcolm stayed outside the house at his truck while Cole slept at the entertainment room. Cole woke up with blood dropping on his forehead, Greta wokes up with Cole screaming. Yes, everything just went intense as Greta runs to Cole and discovers a message written in blood “Get out” and dead rats in his bag. Cole screams with anger as he thought this was all Greta, Malcolm heard the screaming and enters the confrontation. Brahms doll was at the same room, Greta and Malcolm mentioned the deed was Brahms’ fault. But for Cole, it was impossible. So he took his anger at the doll and smashed its head.

The mansion started to make noises like it’s about to go down, rumbling in the walls, as soon as it stopped, a life-sized Brahms shattered and crawls through a mirror and attacks Cole. Now, yes. Brahms is a real boy, but not a boy anymore. Hairy-face and chest adult who is nowhere to be as huge as Cole attacked and killed him. This is the part where everything became ridiculous and less scary. The adult Brahms is yes, a psycho but it turning the supernatural effect of the film into a slasher film takes away the eere atmosphere it built as the film begins. Brahms pursues Greta and Malcolm, hitting Malcolm in the head and leaving him unconscious. Greta successfully gets out of the mansion but returns to save Malcolm. She decided to use Brahms’ rules to make Brahm think that she won’t leave him because he won’t hurt her. But as soon as she laid her to bed, Greta stabs Brahms and though he did fight her, Greta manages to make Brahms weak and she takes the opportunity to go get Malcolm and leave the house.

They did leave the Heelshire’s mansion successfully but the film ended Brahms repairing the doll.

The film is an okay supernatural horror movie with effective jump scares until it gets to its twist and shifts to a different genre. It gets ridiculous and less scary and leaves all the ideas to waste and jumps into something different. While it could be decent for some, it really is something that could work for what it was, the idea may have been easier to accept in paper but its twist and climax was just a way to end things on a high note. Even though that might have been the point, it was not as scary as it could have been before they decided its twist. 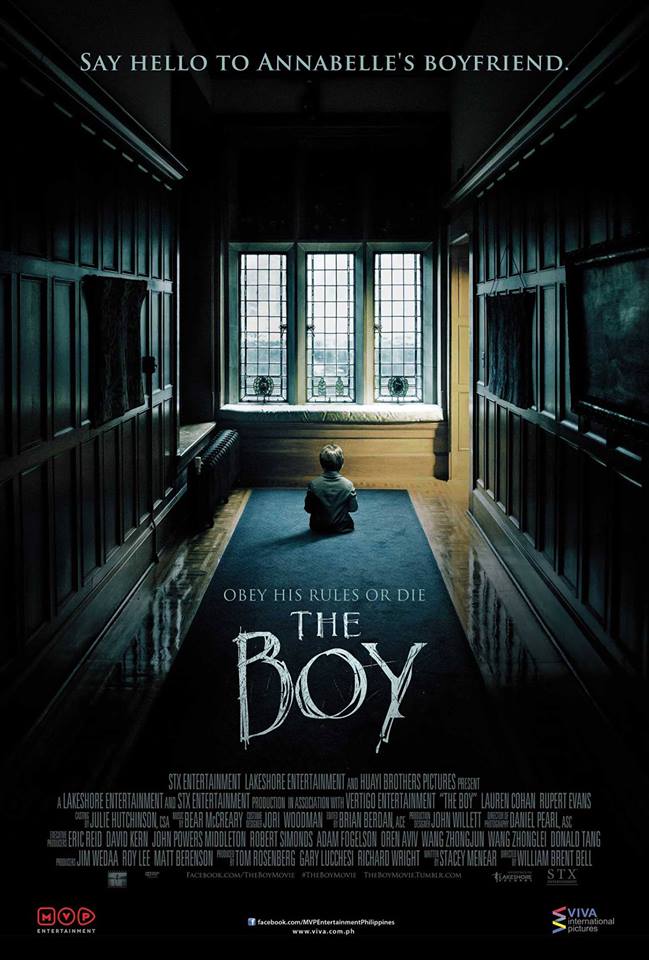 “The Boy” is now showing in Philippine cinemas from Multivision Entertainment Pictures Philippines and VIIVA International Pictures. Rated R-13 by the MTRCB.