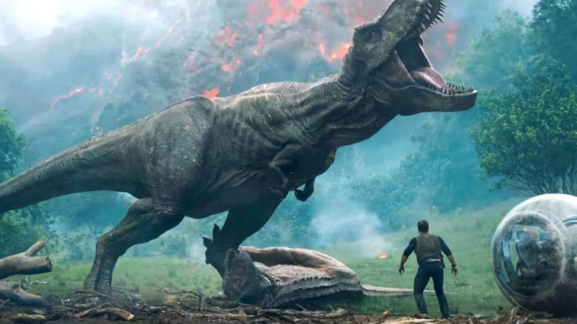 It’s been three years since Jurassic World was released, it broke box-office records everywhere and it brought back our fondness for dinosaurs and the adrenaline rush they give us when chaos strikes.

So, is the sequel Jurassic World: Fallen Kingdom better than its predecessor? Well, you could say so. But it’s also problematic in terms of how the story is built through its characters.

The film tells the story three years after the events of Jurassic World, the theme park being gone and now, the dinosaurs are in danger because of a volcanic eruption that will lead to wiping out everything on the island. That’s why Claire needs to team up again with Owen in order to save the remaining dinosaurs alive. But they were wrong.

Jurassic World: Fallen Kingdom is crazy entertaining. It might feel smaller than its predecessor but it’s definitely packed with more suspenseful and jaw-dropping sequences. But it’s also problematic when it comes to the decision-making of its main characters, especially in the film’s most crucial turn in the end.

The film opens with a bang, a volcano erupting, the awaited dinosaur chasing and fighting and new characters that are interesting. We see a literal kingdom falling, the end of an era but to our joy of wanting more, it expands.

It’s really an edge-of-your-seat entertainment, some scenes might not even be appropriate for the faint-of-heart but it’s all fun. It’s the thrill of being in the danger, whether you’re being chased by dinosaurs or a lava is almost touching your skin or when you just had enough of the bad guys that keeps making the wrong decisions because of money and power. Jurassic World: Fallen Kingdom has all that.

But then again, the story is the core of every film. We could’ve hoped for a better, fresher and maybe less stupid-in-decision-making characters. But what we get is a film that offers solid entertainment. That may be all but that’s what most of us wanted.