Dora’s parents are adventurous academics who have raised their daughter to be fearless, resilient and resourceful. Their life in the jungle has made Dora self-sufficient and sensitive to the world around her. But as Elena (Eva Longoria) and Cole prepare for their most important and dangerous expedition, they decide to protect her — and hopefully help her learn to cope with the world outside the jungle — by sending her to live in the city with her cousin.

Peña was well aware of Dora because his son was a fan of the series and had Dora the Explorer games and books in both English and Spanish. “She is a little superhero, in a way,” he says. “It’s a great story and the main character is Latinx, so there was no way for me to pass this up.”

A scientist and scholar as well as an intrepid explorer, Cole’s city survival skills are a bit rusty. “He’s trying to guide his kid without telling her exactly what to do,” the actor says. “His life experience is pretty much confined to the classroom and the jungle, so he has very limited practical knowledge to impart. But he tries to warn her about the dangers of the big city as best he can.” 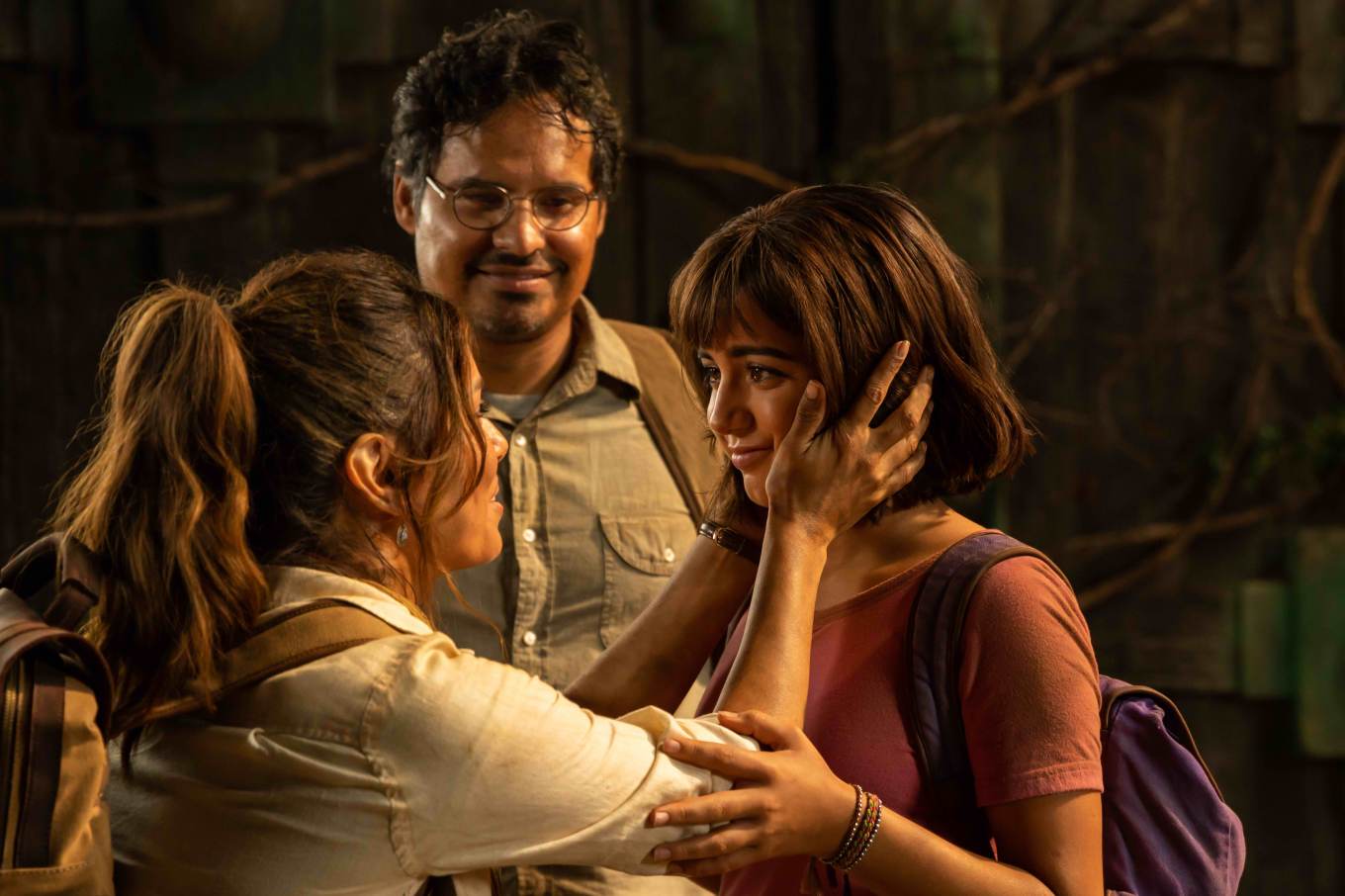 Peña says that the best scripts inspire him to improvise dialogue for his character. “With this, I wanted to find some humor and some parental drama. Everyone was on board with that and we did some fun things, like have Cole give Dora outdated safety tips like, ‘Don’t go to a rave.’”

Moner says moments like that were hilarious for everyone on set. “I would stick around the set all day just to hear his improv,” she recalls.

Peña, a Chicago native who grew up in the city’s Mexican enclave of Pilsen, says the film’s message of striving to be true to oneself is important for young people of all stripes. “I thought it was awesome,” he says. “They are all explorers in a situation where they have to follow their hearts. That’s the most important thing.”

Peña was impressed with Moner’s ability to capture the essence of the character, while still making it her own. “You will definitely recognize Dora. Isabela’s level of commitment was amazing and she makes it feel a little like an old-school Indiana Jones adventure. The sets and effects make you wish you could really be there.”

About Dora and the Lost City of Gold

An internationally beloved heroine springs to life on the big screen in Paramount Pictures’ Dora and the Lost City of Gold, the feature film debut of Dora the Explorer, the iconic Latinx trailblazer whose exploits have delighted parents and children alike since her 2000 Nickelodeon debut.

In her first live-action adventure, the now-16-year-old Dora (Isabela Moner) leads an action-packed expedition through the Amazon jungle to rescue her parents from treacherous treasure-hunters while also facing her scariest challenge yet ― high school!

An idyllic early life spent exploring the rainforest with her zoologist mother Elena (Eva Longoria) and archaeologist father Cole (Michael Peña) has done nothing to prepare Dora to face down the most unpredictable creature on Earth, the American teenager. Sent to stay in the city with her abuelita (Adriana Barraza) and her cousin Diego (Jeff Wahlberg), Dora finds herself in a blackboard jungle where her wilderness skills do her little good.

A school field trip to the local Natural History Museum seems like familiar territory to the intrepid traveler, until she and three friends are abducted by a band of thieves who need her to track down her parents and what could be the richest archaeological find in history: Parapata, the ancient Lost City of Gold. Transported to Peru, Dora and her friends are rescued from the bandits by Alejandro Gutierrez (Eugenio Derbez), a mysterious jungle inhabitant. Dora and her simian sidekick Boots (voiced by Danny Trejo) lead a trek into the unknown to save her parents and solve the mystery behind a centuries-old lost civilization.

Pelikula Mania “Ant-Man’s” Michael Pena is “Dora’s” Dad in “The Lost City of Gold”
%d bloggers like this: