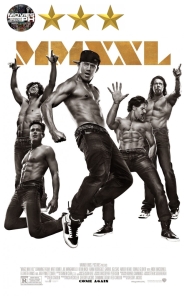 Simpler, looser and has more dance routine than its predecessor but it is also less intimate and less engaging. Magic Mike XXL draws more entertainment in the table with riskier dance routines as the finale is a big scandalous exhibition of sorts. The film opens in a slow and calm narrative that takes the audience in a sleepy state but as it present more characters, the film goes in a road trip with stopovers of fun and intriguing sequences.

Channing Tatum gives one hell of a job in his dancing skills, he’s gone way far in acting from ‘Step Up’ and now he’s doing both which he, looks to be more than passionate doing it. He and his crew just enjoys whatever it is they encounter in their road trip to their final act that ends with a bang.