In the film, beloved dog Bailey finds his new destiny and forms an unbreakable bond that will lead him, and the people he loves, to places they never imagined.

For Quaid, it was an easy decision to return to the character of Ethan Montgomery, whose life is forever changed by the reincarnating spirit of Bailey, whom he always calls “Boss Dog,” that Ethan first bonded with as a boy.

“There’s a reason why Dennis Quaid is beloved, and why his body of work has sustained over such a long period of time,” producer Gavin Polone says. It was also refreshing for the producer to see his star tackle a different style for the character this time around. Amidst the angst, there is much joy. “In the second movie, Ethan is a lot funnier and that’s due to Dennis. He knows where the jokes are, and audiences won’t be expecting that.”

Although the second chapter begins shortly after the last one ends, Quaid explains that we find Ethan at a very different point in his existence. “Ethan has now married the love of his life,” Quaid says. “He was a very lonely figure before, one who liked solitude and felt alienated from the world. He’s grown a lot and is much happier than he was before.” 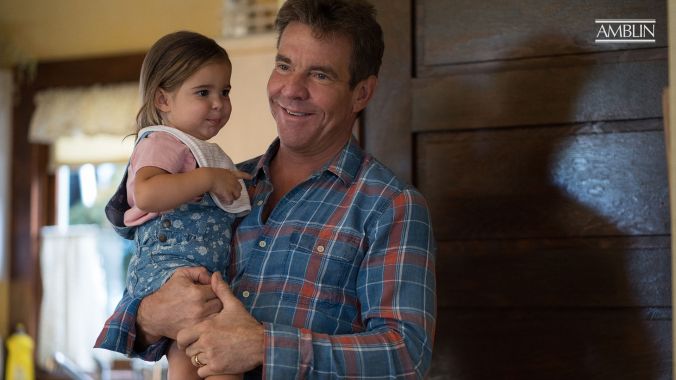 Quaid appreciates that Ethan and Bailey’s story now extends beyond just the two of them, to a new generation of Ethan’s family. “Bailey’s present within the family circle now,” the actor says. “The bond is stronger.”

A self-admitted animal lover, whose dog Peaches is a close member of the Quaid family, Quaid has long understood just what these special animals bring to their humans. “I’ve always been a dog person,” Quaid says, “and each one I have had has meant a lot to me. They’re a member of the family, as well as a sponge that can take on your personality. When they go, it’s usually the first time that children learn about death in their life. That’s what’s so beautiful about these movies, with Bailey’s reincarnation and coming back as this same spirit.”

About A Dog’s Journey

Some friendships transcend lifetimes. In A Dog’s Journey, the sequel to the heartwarming global hit A Dog’s Purpose, beloved dog Bailey finds his new destiny and forms an unbreakable bond that will lead him, and the people he loves, to places they never imagined.

Bailey (voiced again by Josh Gad) is living the good life on the Michigan farm of his “boy,” Ethan (Dennis Quaid) and Ethan’s wife Hannah (Marg Helgenberger). He even has a new playmate: Ethan and Hannah’s baby granddaughter, CJ. The problem is that CJ’s mom, Gloria (Betty Gilpin), decides to take CJ away. As Bailey’s soul prepares to leave this life for a new one, he makes a promise to Ethan to find CJ and protect her at any cost.

Directed by Emmy winner Gail Mancuso (TV’s Modern Family), A Dog’s Journey is produced by Gavin Polone (A Dog’s Purpose), and written by W. Bruce Cameron & Cathryn Michon, and Maya Forbes & Wally Wolodarsky, based on the best-selling novel by Cameron.